This unit is blending four different OCEAN REEF units into one: the extended range of the Gpower, the like-stereo sound of the GSM G.power SL, the clearness and double channel option of the DC and the battery life of the Gdivers.

• It’s foldable inside the mask. Now you don’t need to assemble the comm unit and take it off the mask. Simply fold it close and pack the IDM.

• Digital as the first ever unit we introduced in the market – the DC. This one adds clearer communication, with a higher volume AND 2 earphones for a stereo-like experience.

• Double channel unit for separate teams/conversations, depending on the surrounding environment conditions, it exceeds a range of 800ft /250 meters.

• Easy and solid new PTT button. Also includes the D-mic 2.0 which is now incredibly simple to swap out if needed. Button module doesn’t create entanglement and can be operated via a yellow flat, sturdy button and easy lever. As intuitive as you would want it. New Blue Mic on all 2020 units replaces the new D-Mic and increases the clarity of communication significantly.

• Voice menu that is clear and immediate to learn, matches perfectly the simplicity of the buttons.

This automatic activation system is an exciting innovation in underwatercommunication exclusively from OCEAN REEF. The DAT™ system allows the option of transmitting in a hands-free mode rather than manual mode. Keep pressed the blue lever for 2 seconds to enter the program Mode.

Press once the blue lever and hear DAT OFF. Press the yellow button to activate DAT MODE. Press the blue lever to exit program mode. The unit is now set in automatic transmission/ receiving cycle. To exit DAT MODE simply press the yellow button. A series of impulses are sent out, automatically keeping the unit in transmit mode for 30 seconds. After the initial 30 seconds of transmit mode, the unit will return to receive mode for 20 seconds accompanied by a series of impulses in a different tone from the first. DAT™ is useful when it is necessary to have both hands free while transmitting, making diving more comfortable and safe. Another benefit of the DAT™ system comes in the case of an emergency; by activating the DAT™ a series of impulses will emit every 30-20-30 seconds, which can be received at a great distance by search and rescue workers and other divers.

The changes refer to the microphone and the push button panel.

The brand new version of GSM Mercury will be equipped with the Blue Mic, which replaces the new D-Mic and increases the clarity of communication significantly.

Blue Mic can only be installed on GSM Mercury Units

Blue Mic is all blue in order to be recognized at first sight and not to be inadvertently mounted on non-Mercury units.

The latest version of Mercury Units feature blue lever and button instead of blue and yellow. The new generation will be easily recognized.

It is possible to install the new Blue Mic on previous Mercury units equipped with New-D-mic, to do this you need a special adapter to be purchased separately, already available.

Price of Mercury Comm Units has not been changed. 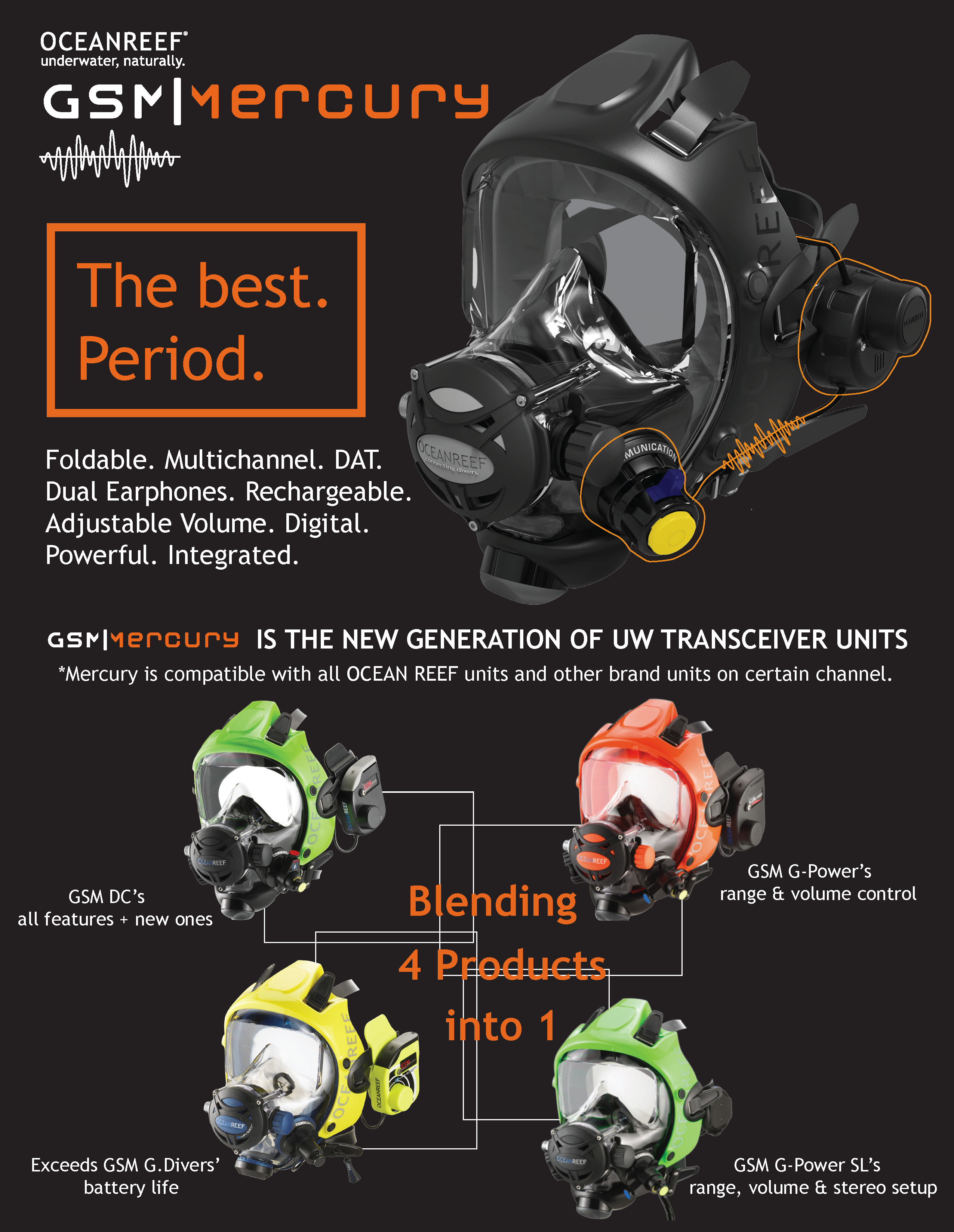 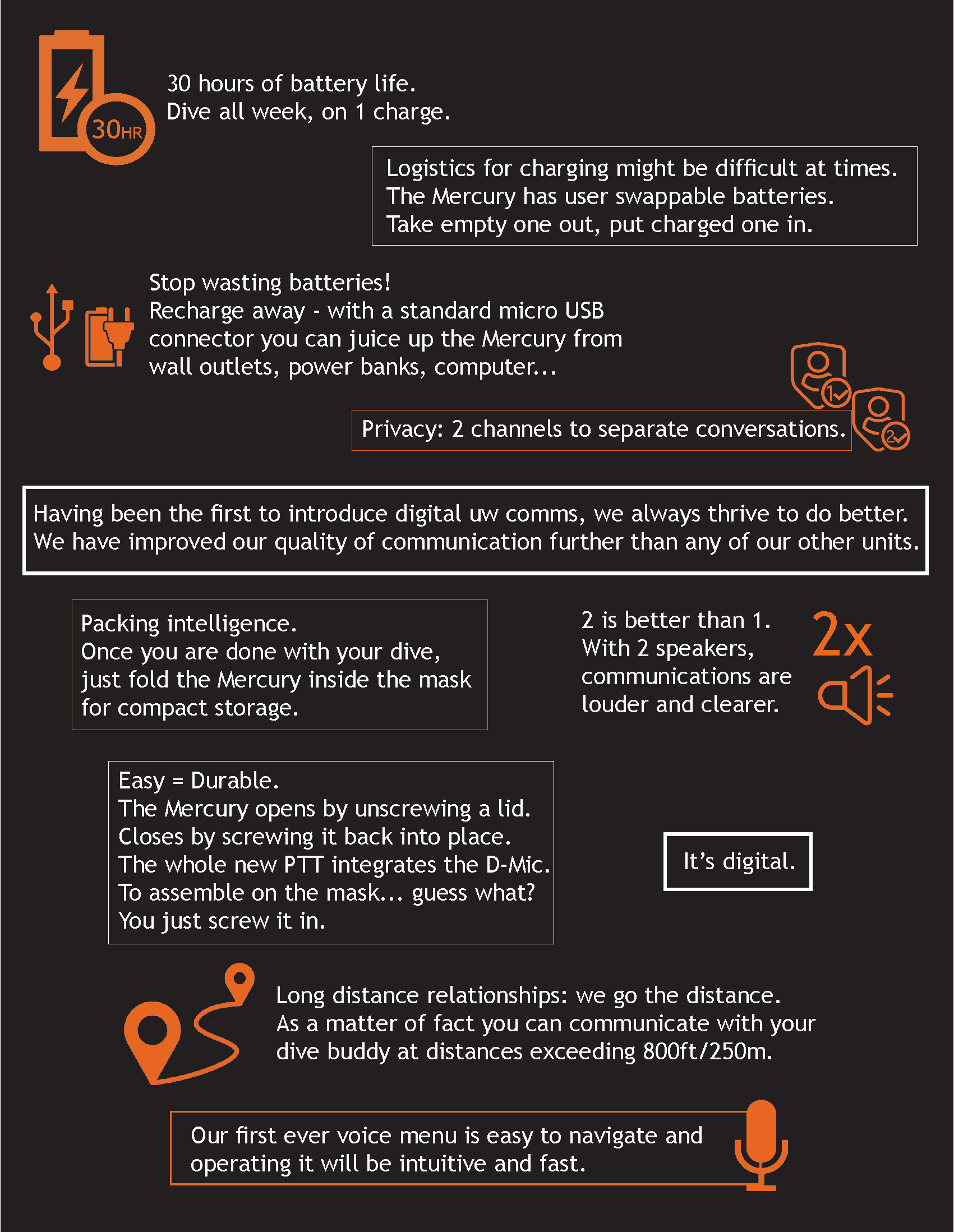